The Grass Is Greener – Saving Grasslands One Acre at a Time

In 2019 alone, almost 2.6 million acres of grasslands were replaced with farmland. This is important because the top meter of grassland soils store around 49 tonnes of carbon dioxide equivalents per acre. Once converted, it will take decades for the soil to be sequestered again.

This family-owned, 16,000-acre farm in Montana saw what was happening to communities and land around them and decided that conversion to farmland would stop at their property line. The prairie plants that they leave protected are amazing in that the longer they last, the deeper their roots that hold carbon. The land also acts as a natural habitat for many different animals including the Swift Fox, the Greater Sage Grouse, and four different songbirds.

By demonstrating the success of this project, the family hopes more local landowners will move to protect their land than too. Just think, one small action can have a planet-sized change. 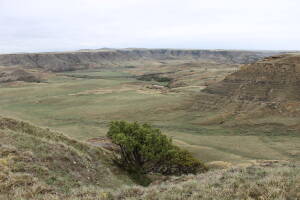 From breaking the law to building a future

The Grass Is Greener – Saving Grasslands One Acre at a Time