Northwest of Dehli in the center of India as well as in a location outside of Lucknow, another carbon project is using carbon finance-funded technology to help farmers adopt new and improved agricultural practices, something we refer to as The Good on The Ground. 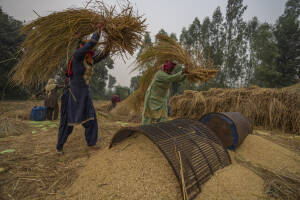 When it comes to agriculture, India’s most prevalent crops include rice and sugar, so much so that they’re the second largest producer of rice and sugar cane in the world. As such, agriculture is also one of India’s leading causes of greenhouse gas emissions thanks to a lack of sophisticated farming methods, the production of massive amounts of crop residue, burning fields in preparation for the next planting, and more. Increasing global temperatures also impact India much more intensely than other countries, and one unfortunate side effect of our warming planet is a reduction in the overall yield of these two prized crops.

Adding to the problem is the fact that rice stalk, cotton stalk, or even sugar cane residue, releases greenhouse gases when burned as well as incinerates some of the carbon in the soil. Rice stalk is burned after harvesting because on average, farmers have roughly two weeks between the harvest and the next planting. With no way to remove these stalks efficiently, burning them is simply the most time-efficient option. Never mind that it also creates a dense fog of smoke and air pollution, evaporates valuable water, and destroys soil nutrients. However, if the stalks can be retilled into the soil and naturally decompose, groundwater is maintained, microorganisms flourish and the soil becomes more nutrient-dense and porous for the next round of planting. We spoke with local community members who mentioned they’re also seeing improved health thanks to the avoidance of using burning practices.

The project addresses the needs of the smallholder farmers, the most vulnerable to climate change with the least access to modern practices, trying to help make their lives easier and increase their crop yields and incomes. The funds that will be generated from the sale of carbon credits by this project will provide direct payments to farmers, provide payment for harvested biomass, resources for teaching crop rotation, no-till practices, mulching and other more sustainable farming activities, and advanced tools and technology to help them monitor and maintain carbon levels in their soil. To see how vast the production is, we witnessed both rice and cotton harvest during a recent visit.

This project intends to bring the use of 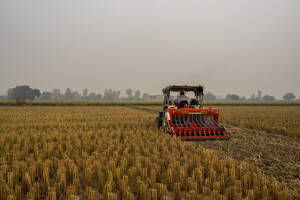 modern technology, that would otherwise not be readily available. One example, the Super Seeder Machine is a no-till planter allowing the new crop to be sown into the soil through the shredded residues of the previous crop., This eliminates the need to burn crop residue, keeps sequestered carbon in the earth where it belongs, and plants the next series of crops, all in one pass.

While the project maintains a strong “boots on the ground” presence to help implement this new technology, some additional benefits come from a little higher up — from a series of satellites orbiting the planet. Over 100+ satellites continuously measure the soil carbon, helping prevent over-irrigation while monitoring carbon levels in the soil. That information is relayed to the ground team, who work with farmers to use this advanced soil technology and data tracking to work with local farmers to optimize their crops. So far, the program has proved to be a rousing success, with 100,000 farmers signed up to date — and more are joining every day. The goal is to enroll 1,000,000 to 2,000,000 farmers at the project’s full scale.

Not only do these improved agricultural practices reduce costs associated with farming, but the improved soil quality also produces larger and more resilient crops, increased revenue for farmers, and job opportunities for local communities during the implementation of the technology and the continued monitoring of the soil.