The March for Science, coinciding with Earth Day, was set for more than 500 cities, anchored in Washington, D.C., and to be joined by dozens of nonpartisan scientific professional societies in a turnout intended to combine political and how-to science demonstrations.

“When the first time in recorded history scientists have to get together to form a march in support of science, something serious is going on,” Rockefeller University’s Erich Jarvis told CBS News chief medical correspondent Dr. Jon LaPook, who is covering the march in Washington.

President Trump, in an Earth Day statement hours after the marches kicked off, said that “rigorous science depends not on ideology, but on a spirit of honest inquiry and robust debate.”

Organizers portrayed the march as political but not partisan, promoting the understanding of science as well as defending it from various attacks. They cited proposed federal cuts to the National Institutes of Health totaling $6 billion, or 18 percent of the institute’s budget.

The marches also come at a time when Americans are increasingly pessimistic about the future of the planet. A CBS News poll found this week that just 12 percent of Americans believe the environment will improve for the next generation, while 57 percent said it will get worse.

Here are the highlights from marches and Earth Day events around the globe. 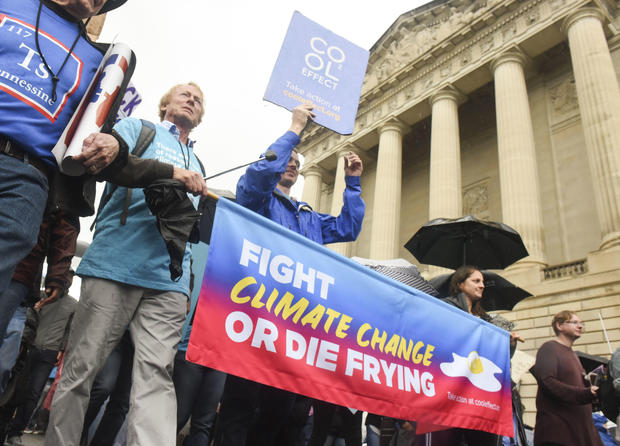 Thousands of people stood outside the Washington Monument amid bouts of downpours, listening to a mix of speeches and music. Speakers noted that President Trump was in the White House nearby, having canceled a weekend in New Jersey.

This was the first protest for Jeannette Villabon and her son Nikko Chey of Stanhope, New Jersey. So Villabon went all out, donning a Tyrannosaurus rex costume and holding a sign that said: “Hey tiny hands fund EPA study. Quit being cretaceous.”

Mr. Trump’s “archaic thinking is going to ruin us all,” Villabon said.

Other signs were only slightly less pointed, such as “edit genes not the truth,” “data not dogma” and “global warming is real. Trump is the hoax.” Signs and banners readied for the Washington rally reflected anger, humor and obscure scientific references, such as a 7-year-old’s “No Taxation Without Taxonomy.” Taxonomy is the science of classifying animals, plants and other organisms.

The sign that 9-year-old Sam Klimas held was red, handmade and personal: “Science saved my life.” He had a form of brain cancer and has been healthy for eight years now. His mother, grandmother and brother traveled with him from Parkersburg, West Virginia. “I have to do everything I can to oppose the policies of this administration,” said his grandmother, Susan Sharp.

One of the organizers of the first Earth Day, Denis Hayes, said the crowd he saw on the National Mall in Washington appeared energized and “magical,” almost like what he saw that first day 47 years ago.

In Manhattan, the March for Science began with a rally at 10:30 a.m. near Columbus Circle at Central Park West.

Thousands of participants walked down Broadway to midtown Manhattan, ending at West 52nd Street. A 1.6-mile stretch of Broadway was closed to cars for the march.

Marchers held signs with slogans such as, “The oceans are rising and so are we,” and, “Denial is not a policy,” CBS New York reports.

Some marchers also held signs with a silhouette of President Donald Trump and messages such as “absolute zero” and “black hole.”

“From combating climate change and reducing carbon emissions to safeguarding our coastal communities and strengthening resiliency in the face of extreme weather — New York must continue to lead the way forward,” Cuomo said.

The March for Science Los Angeles, under the slogan “Science, Not Silence,” was expected to be one of the largest of the approximately 500 being held nationwide at a time when federal funding for researching climate change and other initiatives is under threat.

Led by two electric massive electric Hummers, several thousand people marched in downtown Los Angeles. They chanted “Money for science and education, not for wars and climate alteration” and carried signs that read: “There is no Planet B” and “The Earth does not belong to man.”

A variety of beautification projects and community education events were planned, reports CBS Los Angeles. These range from a habitat restoration and creek cleanup by the Friends of Ballona Wetlands to the 28th annual Great L.A. River CleanUp.

“We’ve gone through a time where we used to look up to intelligence and aspire to learn more and do more with that and intellectual curiosity … And now we’ve got a government that is saying that climate change is a Chinese hoax,” said Danny Leserman, 26, who was carrying a sign showing a sad polar bear wishing for more ice.

At the California Institute of Technology in Pasadena, hundreds of professors, researchers, engineers and ordinary citizens gathered on a lawn before marching across the city to a park.

Many carried homemade signs that included, “The oceans are rising and so are we” and “A woman’s place is in the lab!!”

The day kicked off around 10 a.m. in Grant Park with speeches from several prominent Chicago-land scientists, reports CBS Chicago. Shortly after, participants marched down Columbus Driver to the Field Museum, where more than 50 science-related non-profits and research groups were stationed for a three-hour expo.

“In the last few months, a lot of the scientific community has felt like they maybe do need to start taking a stand. Science has always strived to remain non-political, non-partisan — and we’re still striving for that,” said Liz Homsey, a co-organizer. “Every single scientist at this event feels that it is much more pro science than anti anything.”

Scientists from across Massachusetts gathered on the Boston Common at 1 p.m. for a rally.

Several thousand people participated in a march from the one of the Berlin’s universities to the Brandenburg Gate landmark.

Meike Weltin is a doctorate student at an environmental institute near Berlin. She said she was participating because — in her words — “I think that politics need to listen to sciences.”

Germany’s foreign minister, Sigmar Gabriel, has endorsed March for Science events across Germany. Gabriel says “free research and teaching are the supporting pillars of an open and modern society.”

The protest was putting scientists, who generally shy away from advocacy and whose work depends on objective experimentation, into a more public position.

In Australia, protesters carried signs urging respect for both science and scientists.

Celebrities also tweeted out their support for Saturday’s event.